In 2012, I decided to spend Halloween in Hong Kong, both as a way to celebrate the holiday and my birthday, which is towards the beginning of October. Hong Kong is one of my favorite destinations and I had been there several times before (and several times after as well), although I had never been for Halloween. I wasn’t even sure if the culture in Hong Kong celebrated Halloween, but considering their British Heritage, I figured if anything, the large amount of Western expats would have some sort of celebration.

Welcome to the SAR!

Turns out, Halloween in Hong Kong was a pretty big deal! Especially in the touristy district of Lan Kwai Fong, which has hundreds of clubs and restaurants and bars lining the avenue, starting at the intersection of D’Aguilar Street and Lan Kwai Fong road. This area is on the actual island of Hong Kong, near the Central Metro station, and is a really great place to party, as you can easily get to it from the metro station and everything is walkable, which is important after a certain point of inebriation.

The view from my serviced apartment.

ride away from the downtown area of Hong Kong proper, they were wonderful, if not a bit cramped. That’s not saying much for Hong Kong, however, as every piece of real estate on the island or even in Kowloon is small and cramped, due to sky high property values. Hong Kong is very similar in that regard to New York, with the only difference being the addition of several million people and the towering 60+ floor residential blocks built to house them. I rented a two bedroom serviced apartment that was probably 700 square feet total, but the lay out was done tastefully and the apartment was furnished in a way that maximized whatever space there was available. It came with a fully functioning kitchen complete with utensils (which I of course didn’t use because I don’t cook), a TV with several gaming consoles, Apple TV, and an apartment wide sound system that had a place to plug in your iPod to listen to music. A doorman and a lobby on the second floor with a concierge service completed the package, and it was easy to get around either by the taxis they would call for me or by the nearby metro station.

As nice as my serviced apartment was, however, I didn’t spend much time there. The highlight of my stay was running into a few of my Indian friends who work in the gem and diamond industry in Hong Kong. I know that many people have a bad impression of the Chungking Mansions off Nathan Road in Tsim Sha Tsui (Kowloon), but since I am unafraid of most anything, and the Chungking Mansions have the best Indian restaurants in the city (along with the best fake Rolexes and purses!), I ended up there for a meal one evening and happened to see a couple people I knew from Jaipur. They invited me to their nearby bachelor pad to party and get drunk on Blender’s Pride whisky, which, as any Indian knows, is the whisky to drink if you wanna get the party started! Since it was Halloween, or close to it, and since I was 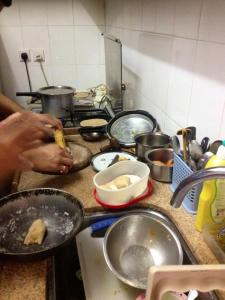 still celebrating my birthday, I thought why not? Let’s have some fun! I’d seen all the touristy sights in Hong Kong several years before, so I spent the majority of my trip just getting drunk with my friends, eating their amazing laal maas, and partying at various clubs around the city, mostly in Lan Kwai Fong.

As my friends were Indian, they didn’t celebrate Halloween, and it was their first year in Hong Kong (they had moved there together to learn their father’s trade). I told them about the holiday and what it represented (basically you celebrate dead ghosts and scary things), which they didn’t quite get, but weren’t about to turn down a good party simply because it was for a stupid reason! They especially were interested in the costume aspect of Halloween and were amazed by the many different costumes we saw on people as we hit the clubs

in Lan Kwai Fong. As in America, there were tons of different outfits–gangs of bloody Snow Whites, Arabian dancers, Greek fighters, computer memes, and so much more! The clubs were packed the night before Halloween, the night of Halloween and pretty much several days before and after both. We saw more than several street brawls, people puking alongside the road, illicit make-out sessions in dark back corner booths in more ritzy clubs, and tons of people pissing on buildings. I got wasted more than a few times, and on Halloween night, grabbed a nearby guy’s pirate hat and decided to become a runaway pirate queen. As per the usual, most people jokingly asked me “What are you, the Girl with the Dragon Tattoo?” since obviously, I dress like her and I have tattoos and it’s kind of one of those things were one could easily mistake me for actually attempting that look as a costume.

The clubs stay open very late in Hong Kong and if you stay in the touristy Lan Kwai Fong district, are not difficult to get into, save for the sheer number of people. There are generally no guest lists or lines in these sort of divey places, and we spent a fair amount of time hanging out in the bars along Lan Kwai Fong. However, as Halloween grew closer, they became so incredibly crowded (fuck 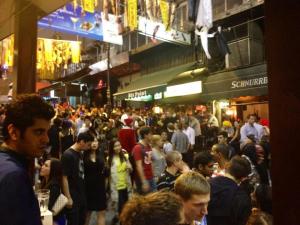 The crowds of people on Lan Kwai Fong street on Halloween night!

the fire codes, they were packing in as many people as possible to the point where you literally would get so crowded in your feet would be lifted off the ground) that we bailed for some more obscure clubs off the beaten tourist trail. My local friends took me to a more expensive and nice cocktail lounge up high in a skyscraper off of Nathan Road that had a fantastic view of the city; we also hit up a more underground style club playing, of all things, hip hop. All in all, it was a great time and most every night we stayed out until 6-7am, opting for yummy food at 24hr Middle Eastern or Indian places after our binge drinking. Since it was a holiday, some of the clubs never even closed–they were open 24hrs a day, and from my understanding, some always operate this way.

There’s no set time that the bars have to close, so some are always open, some close at 3am, some at 6am. That’s one thing I love about Hong Kong–there are very few rules. There’s also no sales tax on most items, save stuff like alcohol and tobacco. It’s a place that is free from a lot of the random little laws that in America are utterly unnecessary.

Anyways, all in all, I had a great time. It was unique to see such a culturally American and Western holiday interpreted in a Chinese setting, and to experience it with Indians who had never seen Halloween celebrated before. The combination of random Western cultural references (Snow White, Spiderman, Greek soldiers) a Chinese city/culture, and Indian friends made for a very unique experience. In addition to all of that, I got to celebrate my birthday again, with a cute little cake my friends snuck out and bought for me, as well as with

Drunkenly running around the Metro late at night!

nightly servings of my favorite food in the world, Rajasthani laal maas. I will never forget running barefoot, drunk, through the Hong Kong metro at 4am singing “Mein Sharabi” (a Hindi song whose title literally means ‘I’m Drunk!’ and who’s lyrics consist of repeatedly saying ‘I’m drunk, I’m drunk’ over and over again), swinging from the metro handrails, forgetting my Octopus card at some random bar, and hopping the turnstiles more than a few times. Hong Kong is an amazing place, even more so on public holidays, because while Hong Kong natives work hard, they play even harder. I highly recommend visiting!

To Stay: Ovolo Hotel Serviced Apartments, 256 Tung Chau Street, West Kowloon. Room range from $250-$400/night, depending on room size and time of year. Family friendly pseudo-hotel with high speed wifi, small but nicely designed rooms, full kitchens, TVs with gaming consoles and Apple TV units, located in a quiet residential area of West Kowloon (not on Hong Kong island). There’s a metro station within walking distance of the hotel that connects you cheaply and easily to the rest of the city, and the doorman and concierge on the 2nd floor can call you very affordable cabs to get to the island as well. There are complimentary soft drinks and alcohol on the lobby level 24/hrs a day and several fast food restaurants that deliver to the apartments, as well as a 24hr gym on the 1st floor.
To Party: Lan Kwai Fong, a group of small side streets on Hong Kong island near the Central metro station. There are over 100 clubs, bars, and restaurants in Lan Kwai Fong that attract a diverse mix of both tourists, expats, and locals, although predominantly it’s tourists who fill the bar stools. The area is very crowded on all major holidays and also on the weekends, so it can be hard to grab a drink and find anywhere to sit. The atmosphere is young and party oriented, so if you’re looking for a chill spot to kick back, relax, and chat, this would not be the place to go. If you’re more into a chilled out experience, try Vibes, an open-air lounge bar inside the Mira Hotel off Nathan Road (an excellent hotel I’ve stayed at and will review later). For great views of Hong Kong island and Nathan Road from high up, try the Horizonte Lounge, which is located inside the Hotel Madera off Nathan Road, and has a great little terrace to soak up the views. I wish I could remember the name of the hip hop club we went to later on during my stay, but I sadly can’t.
To Eat: Hands down, Chungking Mansions wins this one! You can get a great meal for less than $20 USD. However, the food is predominantly Indian, Pakistani, and Middle Eastern (with some Moroccan and African food thrown in for good measure), so if you’re looking for Chinese food (Mandarin or Cantonese), don’t go there. Also, the Chungking Mansions have a rather deserved reputation for being shady and dangerous, and full of scammers, so just be careful and don’t go in there thinking you’re gonna buy a real Rolex for equivalent $40 USD. I do not care for Chinese food of any kind, so beyond this, I cannot offer any more recommendations. Sorry.
To Listen: The songs I partied to!

1 Comments on “Halloween in the SAR (Hong Kong, China)”