Floating Down the Ganges (Varanasi, India) 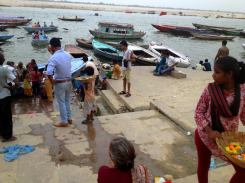 Me, being a creep and taking a photo of my tour guide’s ass, lol (banks of the Ganges).

Selling marigold cups with candles in them to set free along the river during the Sunset Ceremony. 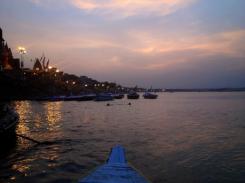 Sunrise from our boat, floating along the Ganges. 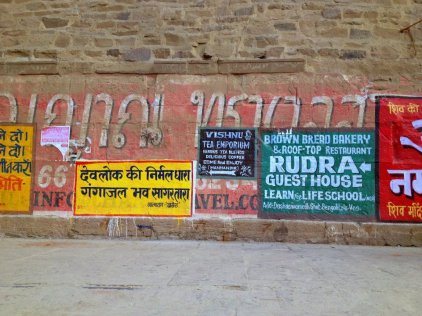 Adverts alongside the Ganges river. 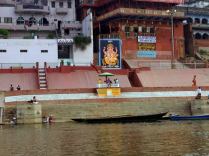 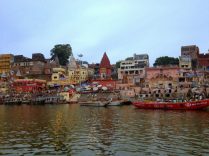 The banks of the River Ganges at Varanasi. 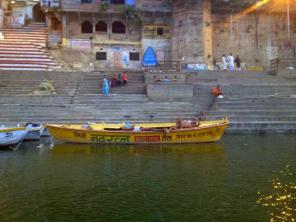 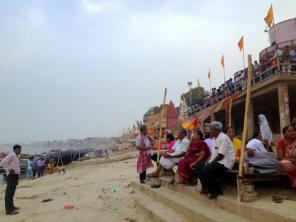 The bank of the River Ganges at Varanasi. 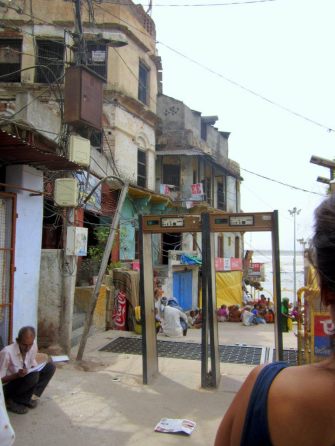 Metal detectors leading to the Ganges waterfront (do they help at all??). 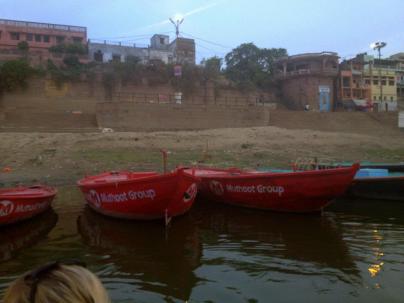 Hard to see it, but in the center of the photo is a dog chewing on a human pelvis, on the riverbank. 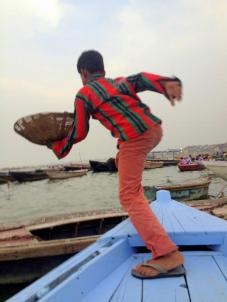 A small child who jumped aboard our boat to sell us marigolds. 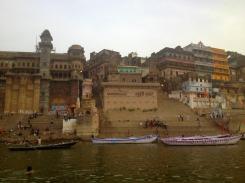 Me, showing you the ghats along the Ganges. 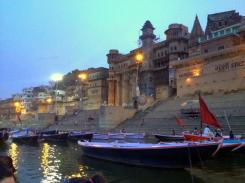 Sunrise at Varanasi from the Ganges. 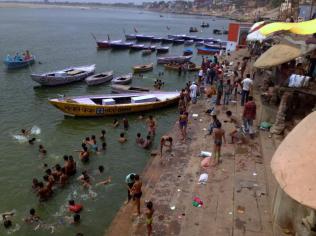 Locals bathing in the River Ganges. 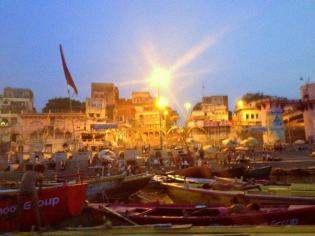 Varanasi from the Ganges river, at sunrise. 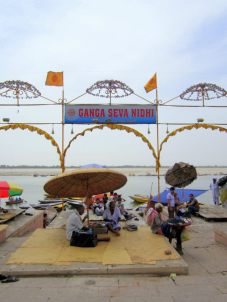 Entrance to the ghats (steps) that lead down to the Ganges riverfront. 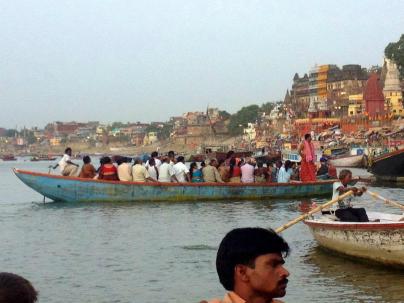 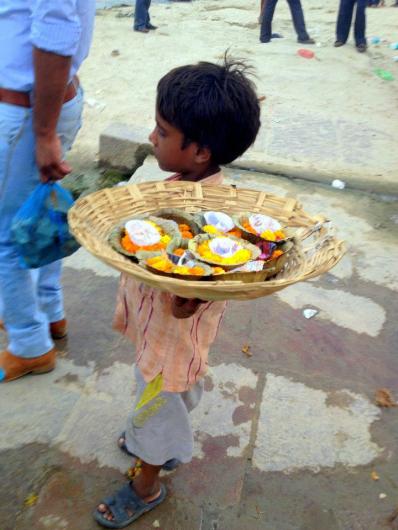 Small child selling marigold flowers along the Ganges at Varanasi. 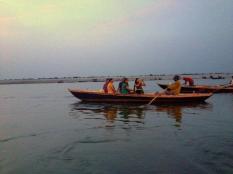 Indians taking a sunrise boat ride along the Ganges. 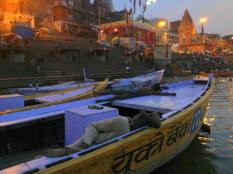 Locals sleeping on their boats on the River Ganges. 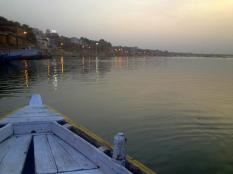 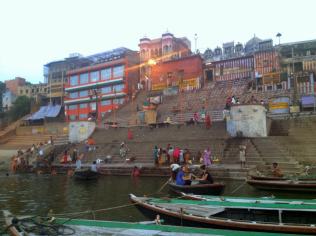 Ghats of Varanasi, after sunrise. 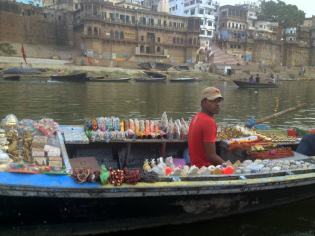 A man selling local provisions and trinkets from his floating boat store, on the Ganges river.

Part of the included activities for Varanasi, as part of the GAdventure tour I joined, was a sunrise boat ride down the River Ganges. This event was an absolute once-in-a-lifetime experience (although, truth be told, I’ve experienced it several times now). Seeing the crematoriums alongside the Ganges was truly astounding, although it was difficult for some people on my tour; the smell of burning flesh permeates everything in the city, as the crematoriums run 24/7, 365 days a year to keep up with the demands of Hindus and Jains who wish to be cremated in the holy city of Varanasi. 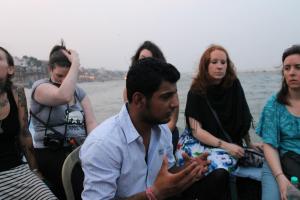 Our guide explaining Hinduism to us Westerners.

We had a wonderful guide who explained in detail all of the religious practices of Hindus and Jains while we floated past bodies being cremated in open air fires along the banks. It was hard too, for some to see the remaining bones of these cremations being dragged around and chewed on by stray dogs. The cremation fires are not like they are here in the West, which burn hot enough to incinerate human bone–these are just funeral pyres made of wood, and thus major bones like the pelvis and skull are left behind, sometimes with flesh still attached. In addition, some members of society (such as Brahmans or priests, as well as pregnant women and babies) are not cremated, as they are believed to be sinless and thus not in need of salvation. So, instead of being cremated, their bodies are tied down with stones and thrown into the river. This leads to “floaters”, or dead bodies that occasionally pop up to the surface of the river, half decayed, to get buoyed along on the current, and sometimes even to wash ashore, also to be eaten by stray dogs. 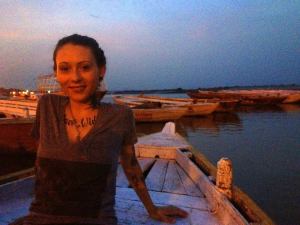 For sure, Varanasi is not for the faint of heart; however, I was very impressed to see the Indian population who handle death and the experience of dying and bodily decay so naturally. In essence, death is as much a part of life as birth or living, and our Western cultures could learn a lot about the inevitability and acceptance of our own mortality from the Hindus and Jains of India. As I am fascinated and intrigued by the concept of death, and as I am very interested in spirituality and religious practices, I was not at all upset by the boat ride experience (although we did see a dead baby float by, which was hard, and we saw a dog chewing on a pelvis, which still had flesh attached, as well as several cremations which we were obviously not allowed to photograph or video). Overall, I found it a magnificent and visceral experience.

We also were told, by our guide, about aghoris, who are sadhus (religious men), who inhabit the charnel grounds of these crematoriums and who worship death as a way to find meaning in life. I was absolutely fascinated by this concept and the existence of such men, and was determined to find one, despite the warnings of my guide, who told me that aghoris give the worst curses in Hinduism and that they are not to be bothered. I was told they were most likely to be viewed at night, so I gave it my best and returned in the evening, and after witnessing the sunset ceremony on the banks of the Ganges, I wandered around the ghats of Varanasi trying to find one, but sadly, to my ill-luck (or luck?), I didn’t stumble across any aghoris.

…and me being a dork and sticking my finger into the River Ganges!