The ferry to Stone Town arrives! 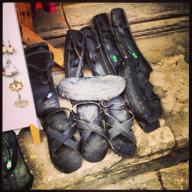 Shoes made out of tyres in Stone Town market.

The Tanzanian flag on the ferry from Dar Es Salaam to Stone Town, Zanzibar Island. 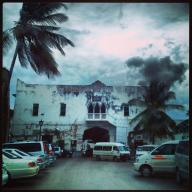 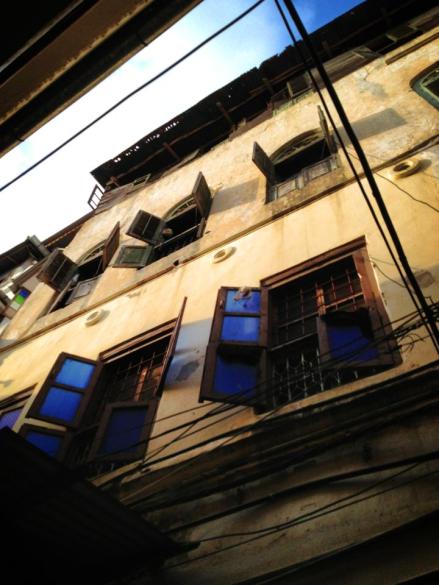 Looking up on my walk through Stone Town.

Queuing up for the ferry ride. 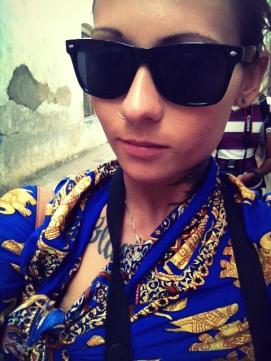 The cart at the ferry terminal the carried my luggage.

On the ferry ride to Stone Town, Zanzibar.

Inside a fabulous Indian restaurant. 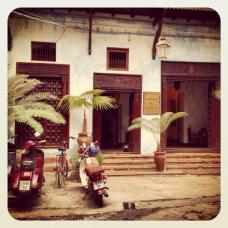 A hotel in Stone Town.

“Facebook” boat on the beach at Stone Town ferry terminal.

Near the old Persian bathhouse.

The markets of Stone Town.

On the ferry to Stone Town from Dar Es Salaam.

Waiting in a tuk-tuk at the ferry terminal.

A minaret in Stone Town. 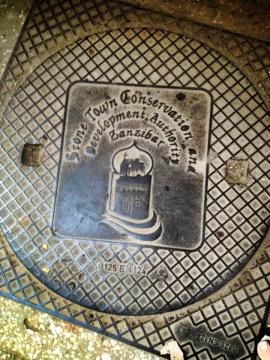 I visited Stone Town by ferry from Dar Es Salaam, after a long and arduous tour of East Africa (including all the major Kenyan and Tanzanian national parks). It was a welcome and relaxing end to a rough safari, and the ferry ride from Dar Es Salaam to the island of Zanzibar, which sits about 1hr by boat off the coast of Tanzania was absolutely beautiful. On the way to Stone Town, the only major city on Zanzibar island, and the port of entry for all transport for the island, I saw schools of dolphins off the side of the boat, as well as a couple whales blowing sea water into the air!

The ferry terminal in Dar Es Salaam was packed, and the wait was long, and since Zanzibar is an autonomous territory of Tanzania and not exactly Tanzania proper, there was an equally long customs and border crossing wait once we arrived in Stone Town. It took officials about 45 minutes to check our bags and stamp our passports, but once we got through, the beauty and exotic mystique of the island more than made up for whatever inconveniences we experienced.

Zanzibar is a exotic, elegant, swirling mixture of Hindu, Arabic and African cultures. Known often as “spice island”, Zanzibar was a major hub for the trade of spices (grown on the island in huge spice plantations) as well as the trade of slaves from mainland Africa. Situated as it is, and having a good natural harbor, it was an important island in the ancient Indian Ocean trade routes for thousands of years. Though it’s located off the coast of East Africa, for a good long time it was considered part of the Omani Sultanate and was ruled by Oman, which lies on the Arabian Peninsula, far to the north of the island. The Omanis were a seafaring people who dominated much of the spice and slave trade off the coast of East Africa and thus controlled the island, bringing the Muslim religion and Arabic language to the island. Indian traders from the subcontinent brought the Hindu faith and culture, and the slaves and East African slave traders brought Swahili language and culture to the island as well. It is truly a cultural melting pot in the most visceral sense of the term, and a truly beautiful island blessed by naturally blue waters and white sand beaches.

Stone Town is also the home of the famed musician Freddie Mercury, who’s childhood home and birthplace is on the island. He was Persian, and his heritage highlights another interesting cultural component of the Zanzibar history, that of the Persians (Iranians) who also settled the island. Monuments to Freddie Mercury can be found all over Stone Town. The markets here are also a big draw, selling the most amazingly fresh and intense spices (grown locally) as well as all manner of objects–anything from contemporary art by local artists, to wooden furniture (handmade) to shoes made from used tyres.

One of the best curio stores in the world can also be found down Stone Town’s winding market streets–a place called the Zanzibar Curio Shop. It looks like a typical touristy store, full of cheap magnets and bad souvenir t-shirts, but it is so much more than that! If you poke around for a few minutes, you’ll realize that the entire store actually spans both sides of the road and occupies many rooms behind the main room. In all of this space, there are tons of antiques and items of wonder; one can find everything from old tin adverts in Hindi to old photographs of the Omani ruling family to old scuba helmets and brass globes which hang from the ceiling by brass chains. It is literally the coolest store I’ve ever had the pleasure of walking into, and that’s saying a lot, because I’ve been to curios all over the globe! The Zanzibar Curio’s selection of Arabic light fixtures alone will drive you mad (think of an entire room full of Moroccan style lamps of all colours, shapes, and sizes!).

The store is run by two Indian brothers who hunt the entire African and Indian continents for items of interest, going to estate sales, old backyard garage sales, and business liquidation sales. Their taste in items is to be admired.

All in all, Stone Town was one of those truly unique, utterly exotic places that one can scarcely imagine exists in our bland, globalized, modern world. Every store is a boutique, every item is handcrafted, and the buildings are original and historic and the streets narrow, winding and lovely. I highly recommend a trip to Stone Town and if you’re there, be sure to stay in a historic tea house! Stone Town and Zanzibar island makes for the perfect ending to an East African safari.

To See: Zanzibar Curio Store – “The Most Curious Shop in Stone Town” : Hurumzi Street, Next to Clove Hotel, behind the House of Wonder. Tel: +255 24322077, Email: zanzibar_curio_shop@hotmail.com.

← Jaipur By Tuk-Tuk
Driving on the Roof of the World (Leh, India) →