Me in front of the Taj.

It was an Indian holiday when I visited; hence why it was so busy!

Cows eating garbage outside of the Taj. 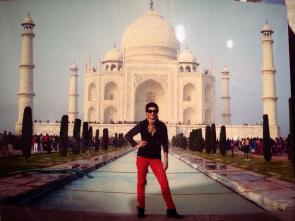 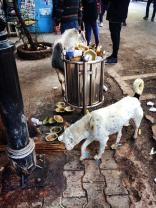 Modeling for my camera man.

The entrance to the Taj; detail. 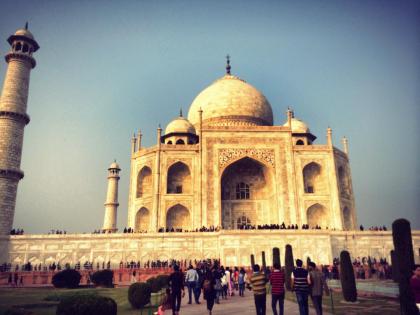 Standing at the base of the Taj. 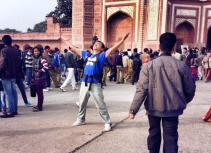 This man really captured the spirit of the Taj.

The entry gate to the Taj Mahal

I travel to India A LOT. Let’s just get that out of the way before anything else is said. I have invested in several businesses in India and I have a lot of friends there, in addition to simply loving the country.

That being said, I’ve seen the Taj a lot. More than 3 times, less than 10 probably. But every time I see it, I can’t help but have my breath taken away. Of all the famous historical monuments one can see in this world, between the pyramids and the Great Wall, the Taj Mahal is one of the most majestic and beautiful. The first time I saw it as part of a tour group with GAdventures, who run most of the young adult and “adventure” style tour groups in India. The second, third, and so on times I’ve seen the Taj, it’s been as a solo traveler, or as a traveler unassociated with any tour company. I just booked myself the transport from Delhi (or Jaipur, or Udaipur, or whatever other city I was coming from), usually a taxi, which tend to be very cheap and very nice in India. I also booked myself my own hotel (the Oberoi AmarVilas are the best, as each room has a balcony which overlooks the Taj), and just showed up and visited the Taj.

Most people, women especially, seem to think of India as wild and wacky place that requires them to join a tour to travel the country safely. While I admit that I thought the same at first, India is actually not that hard to travel solo so long as you have someone with you who can translate and help you arrange stuff like taxis and tuk-tuks. It’s definitely not at all unsafe, at least, that has not been my experience; I have always felt safe in India and welcomed. People also think India = food poisoning, but again, this has not held true for me either, and trust me, I eat the local food like a dying child eats biscuits. I eat street food, non-street food, homemade food, food from hotels, food from restaurants, dhabas, etc. NO SHAME! And no food poisoning.

This particular visit to the Taj, I stayed at the AmarVilas and one of my favorite things (besides waking up to the amazing view of the Taj from my hotel window) is that they are so close to the Taj. Most hotels in Agra are close to the Taj, or relatively so. The approach to the Taj is down one long road on either side of the Taj (west or east) and most of the hotels branch off of this road. The AmarVilas are one of the closest hotels to the Taj and they will send a golf cart to pick you up and drive you the 200 meters to the monument as well as get you an accelerated entry ticket and a nice little bottle of water. Having a white gloved golf cart attendant drive you there and then wait for you is really nice, considering how easy it is to get lost in the crowds who inevitably swarm the entrance to the Taj. An accelerated entry ticket is also a must, as it’s just a few rupees more and will allow you to cut the line (like we all secretly want to do when the queues get big!).

After a certain point, on the approach to the Taj and before entering, it’s foot traffic only and there are several stands selling cheap souvenirs, soda, memory sticks, t-shirts and all manner of Taj Mahal related crap. Marble is mined in the area so lots of the souvenirs are made of white marble. Here is where you will also find, or be found by, touts who will either try to give you “guided tours” of the Taj or who want to accompany you with their camera to take your photo in various different cheesy poses around the Taj grounds. Considering that these photographers literally charge nothing (but will ask for a tip) and only make you pay 100rp. per printed photo (8″x11″), it’s actually not a bad deal to get one to come along with you if you are visiting alone or decide to drop your camera and break it right before entering the Taj (me anddddd me, lol). If you want to find one, just ask the first tout who approaches you for a camera man and it’s guaranteed he’ll be able to help you find one. And, like I said, they won’t charge you anything BUT you should tip them (NO ONE should work for free).

To get in, you must go through a very lax security station, but remember they won’t let you bring in any cigarettes or lighters, even unopened packets of cigarettes, so if you’re a smoker, just leave that behind at your hotel. Unless you’re going very early in the morning or late in the evening (the Taj opens at sunrise and closes at sunset), you’re going to hit massive crowds (except also maybe during the summer when it’s so hot everyone who’s reasonable is inside in the air conditioning during daylight hours). So just be prepared to have tons of people in every picture you take of the Taj unless you get there early or late. Also, during the winter, the smog and fog tends to be VERY heavy and the early mornings and late evenings are the worst for the smog/fog. So either way really, you’re gonna just have people in your pictures. Get over it.

The entrance to the Taj is dramatic as you walk through the Great Gate, which is made of red stone. You’ll see a garden which leads you to the Taj Mahal proper. Remember that the Taj Mahal is a muslim burial ground, so be respectful and before you enter the actual building, take off your shoes and store them in their little cubby area or just pile your slippers (flip flops) on top of everyone else’s. Sometimes, they will allow you to put white elastic coverings over the bottoms of your shoes instead of removing them, but either way, don’t just go barging in without properly attending to your shoe situation. And once inside, be reverent and quiet and don’t take pictures inside of the Taj because, again, it is disrespectful to the dead.

Lastly, don’t hog up the good photo op locations (aka the “Princess Diana bench” and the pools in front of the Taj) and if you’re going on an Indian holiday, be prepared for EXTRA LARGE crowds. Oh, and if you do want an actual tour guide, arrange for one at your hotel, don’t pick up one at the gate. If you must do that though, ask to see their credentials because any tour guide who’s real will be licensed.

Oh and if you do hire a dude to take your photos, if he disappears, just wait for him outside of the gate and if need be, just start asking people for the location where they develop the photos. Generally there is only one or two photo developing locations and since your photos will actually be printed for you on photo paper, chances are your photo dude will be there, printing you off your photos. He will also give you (for free) a CD with all the digital images on it. So TIP HIM. And TIP whatever guide you use as well, if you use one. You can never tip people enough, really, and since INR is so much cheaper than USD, there is no reason to be stingy. If someone has helped you, be generous. Really. And don’t complain if you see stray dogs or water buffalo or cows hanging around eating the garbage or just chilling. They were here long before you and the people who live in India care for them and like them so who are you to show up and act grossed out about their existence? Accept that India is different from the USA and be grateful the world isn’t full of sterilized McDonalds and ugly suburban strip malls. 🙂

GAdventures (recommended tour company): $1200, inclusive of board and transport, 15 days.